Keisuke Okunoya wears shorts the whole year round. With this unforgettable look, the CEO of the clothing company P.I Co., Ltd is OWNDAYS MEETS’s fourth guest and here he tells us about the road that led to the establishment of his own inimitable style as well as the direction he plans to take in the future.

A creative, passionate blood type B, Keisuke Okunoya was born on September 5th 1977. After graduating from Fashion College he started working at a major listed clothing company, gaining experience in sales, planning, merchandising and branding. He joined his father’s company, P.I Co., Ltd, around eight years ago and became CEO on November 1st 2010, going on to launch the brand “furamu clip.” With a firm belief in building relationships with customers through individuality, he travels around Japan sometimes as the CEO of a clothing company and sometimes acting as a teacher and providing advice to retailers on how to prosper and be successful. He also spends 365 days a year wearing shorts and is thus widely known as the “Short Pants Shacho!” When you search for the Japanese word for shorts on Yahoo! or Google he appears higher up the list than even Wikipedia!

You really do make a big impression on people! How did your current style come about?

Well, my father used to run a clothing company and this sparked my interest in clothes when I was a kid. I’ve always liked the smart look and I’ve worn the dress shirt and jacket combination since I was a student, but when denim came into fashion about 15 or 16 years ago more people started wearing white shirts and jackets in combination with denim jeans, and that style began to take off.
When all this was going on I decided that I wanted to have a unique look. I thought about what exactly this might be, and that’s when I realized that in those days no one combined a smart shirt and jacket with shorts... not that many people do these days either!
I wanted to do something different; I wanted to look different from others. I’ve always been one of those who wants to stand out from the crowd, so I really wanted to have a unique style that only I was capable of pulling off. In the past I used to wear three-quarter length shorts but they have gradually gotten shorter over the years since I found a job and started working! 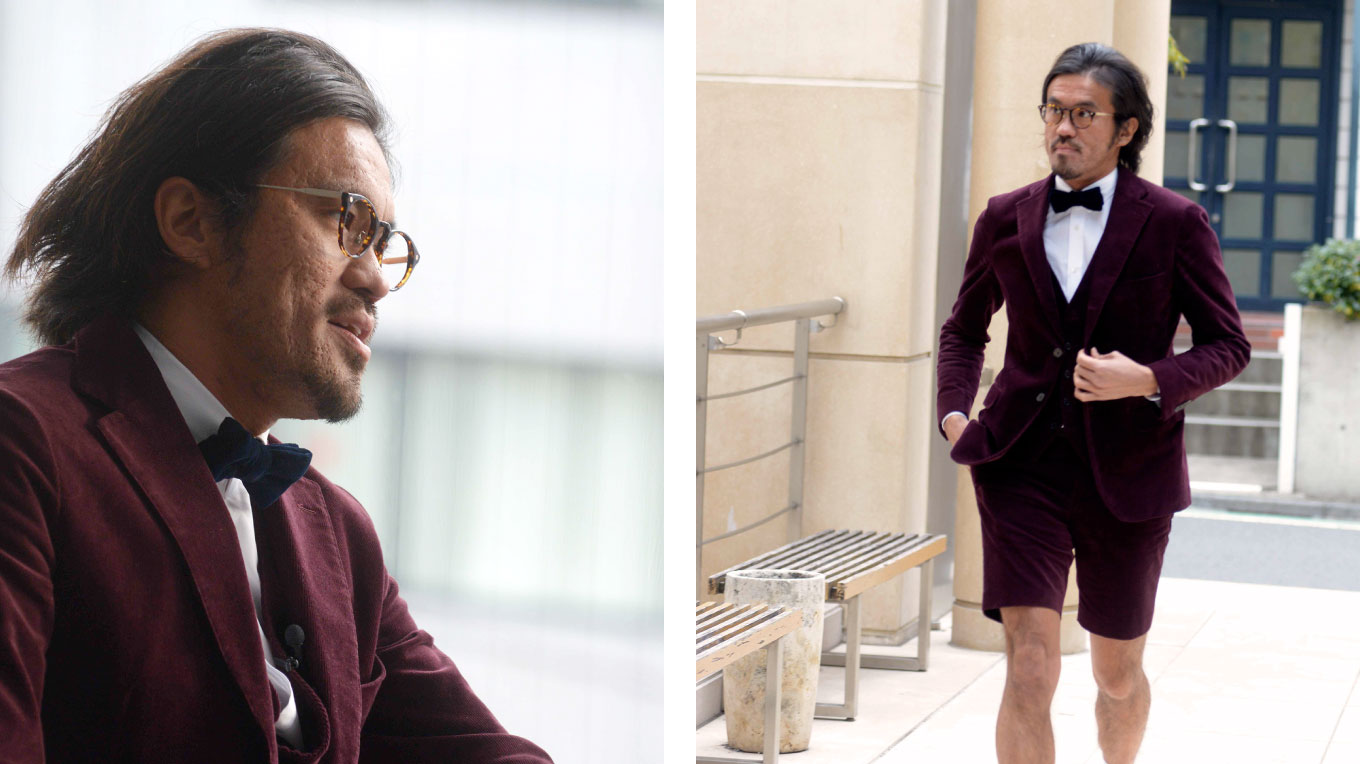 Do you really wear shorts the whole year round?

I actually used to wear shorts for two thirds of the year and long pants from December to February when it gets really cold. But on a business trip to Osaka about three years ago, a customer got really disappointed when I didn’t turn up in shorts, and that’s when I realized that whenever people thought of me they associated me with shorts. I knew then that I must never let anyone down again by wearing long pants!
TMy family name is Okunoya, but many customers just call me “Mr. Shorts” or the “Short Pants Shacho” (‘shacho’ is the Japanese word for a company president), so I simply can’t wear long pants again. I now wear shorts for three thirds of the year, or in other words, every single day! I even attend wedding ceremonies like this, and for me it’s now formal wear. 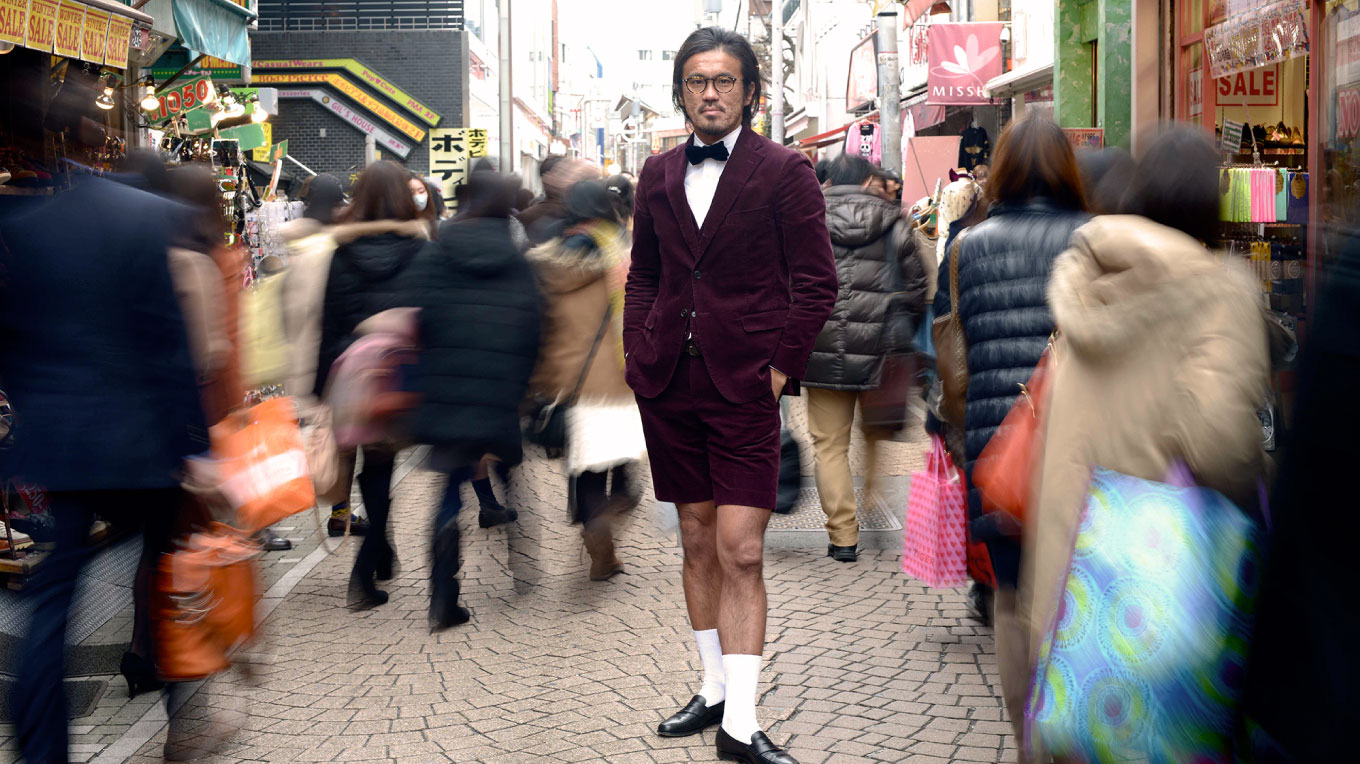 His own working style: the way of the “Short Pants Shacho”

How do you take advantage of your individuality in terms of work?

When I entered the workforce I considered business and personal affairs to be entirely separate, but as I continued working I started to think that I should express my individuality at work just as I do in my own time.
Whenever clothing companies have an exhibition they usually send out these really cool, stylish invitations to their customers, but we have something no one else has in the form of Short Pants Shacho so I appear as a mascot on our invitations to make them really unique. We sometimes even send out totally crazy ones that probably make people think we must just be fooling around, but it’s that type of invitation that doesn’t get thrown away and people don’t forget them.
I’ve always liked entertaining people and making them laugh. And by valuing this feeling and incorporating it into my work, work becomes enjoyable for me and the customers also enjoy themselves. Of course I take my work seriously, but I think my desire to enjoy myself and make others happy is important and I want to keep things this way. 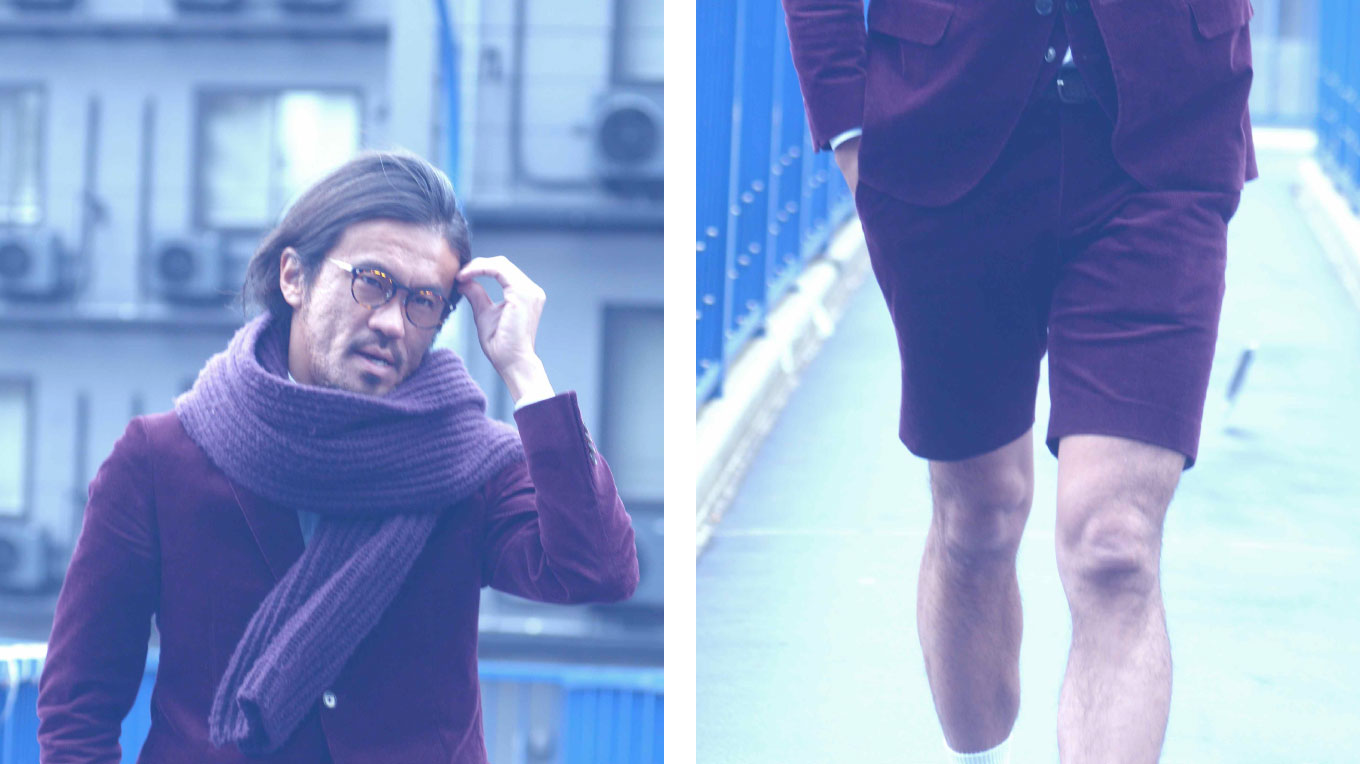 So what kind of road will you be heading down from now?

Up to now I’ve had a few problems because of insisting on my own style. For example, there have been times I couldn’t get into restaurants because of the dress code despite my wearing a bow-tie, and one time when I went on a business trip to Fukui in central Japan it was really cold I so wore a big coat over my usual shorts and jacket and ended up being questioned by the police. They must have thought the big coat and shorts combination looked quite suspicious!
Two years ago above-the-knee shorts were on show at the Milan Collection and Paris Collection, and the trend hit Japan more or less a year later. The words “men in shorts” made it into the media after that, and that’s when above-the-knee shorts trend took off. I’ve been wearing shorts for more than ten years now, so even if they go out of fashion I’m not going to change my own style, I’m always going to be the “Short Pants Shacho!”Interview : January 2014

I really really love eyewear. I often sport a pair of sunglasses, and regularly wear glasses just for fashion. Today I have a bowtie on so I chose these glasses to go with it, but if I was wearing a normal necktie I might have chosen a different pair I think. I don’t usually wear this kind of round frame glasses, but they complement my style and I really like them.